Venta was established by the Romans in around AD 75  as an administrative centre for the defeated Silures tribe in Roman Wales.

Venta Silurum seems to mean "Market town of the Silures"

This is confirmed by inscriptions on the "Civitas Silurum" stone, now on display in the parish church.

The town, which was located on the Roman road between Isca Augusta (Caerleon)

and close to the Severn Estuary,

was - in contrast with nearby "Isca" - essentially established for civilian administration rather than for military purposes.
Initially Venta had a forum and basilica.

By the early part of the 2nd century, during the reign of Hadrian, the civitas had begun construction work on a market place and developing centre of local government. Public baths and shops, including a blacksmiths, were built about the same time.

Remains of farms and dwellings, some with courtyards, have also been excavated.
A Roman temple, perhaps dedicated to Mars and the Celtic god Ocelus, have been identified on the site.

A bowl with a chi-rho symbol shows that the worship of early Christian worship had begun in the late 3rd century.

Following the withdrawal of the Roman legions from Britain, the town remained occupied until at least the mid-5th century Early Christian worship was still established. The town might have had a bishop.

A monastery was founded by Saint Tatheus in the 6th century.

The site of the present church occupies part of an early Christian cemetery.
The name Venta gave its name to the emerging Kingdom of Gwent (called initially "Kingdom of Guenta"),

Tradition holds that Caradog Freichfras of Gwent moved his court from Caerwent to Portskewett around the 6th century.
Archaeology

The Civitas Silurum Stone, which refers to the "council of the Silures."

Remains of a Roman Basilica and Forum
The town lacked substantial defences until the mid 4th century when stone town walls were built.

A small garrison may have been based in the town during this period. 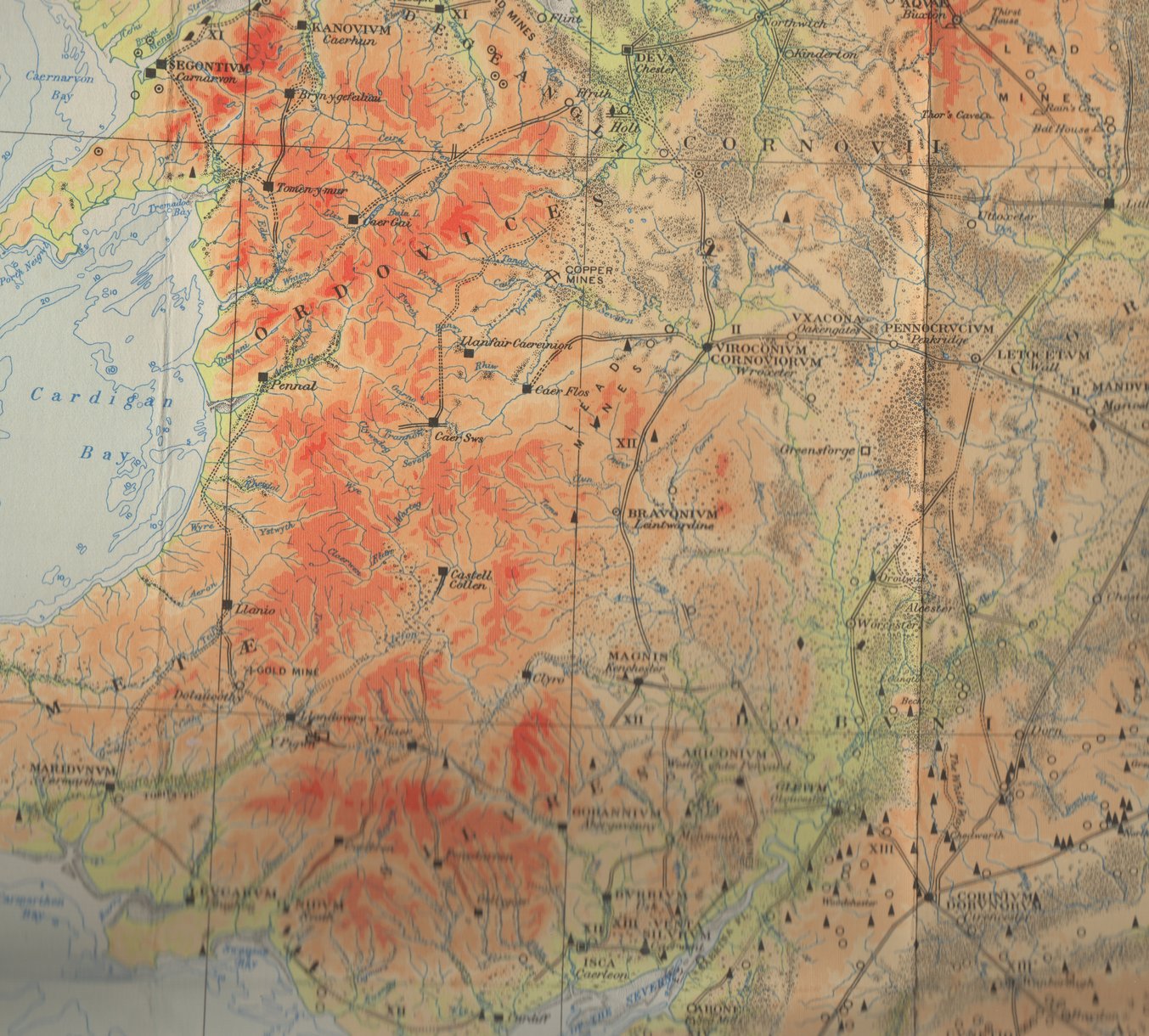 Large sections of the defensive walls are still in place, rising up to 5 metres in height in places.

The walls have been described as "easily the most impressive town defence to survive from Roman Britain, and in its freedom from later rebuilding one of the most perfectly preserved in Northern Europe."[4] In 1881 a portion of a highly intricate coloured floor mosaic or Tessellated pavement, depicting different types of fish, was unearthed during excavations in the garden of a cottage.
In 2008, a dig involving Wessex Archaeology and volunteers from the local Chepstow Archaeology Society, found a row of narrow shop buildings and a villa with painted walls, frescoes of Roman art and mosaic floors.

These excavations featured in Channel 4's Time Team programme, broadcast on 25 January 2009.
Modern houses are built on top of half the site of the old Roman market place.

The ruins of several Roman buildings are still visible, including the foundations of a 4th-century temple.

The fact that most of the houses lacked mosaic or hypocaust-heated floors, however, suggests that despite its size, Caerwent never achieved the cultural level of other Romano-British tribal capitals.
In 2010 a programme of archaeological work was carried out, by Monmouth Archaeology, as part of the construction of a new garage, at Museum Cottage. A number of finds were made.

The Brythonic group, on the other hand, is now represented by Welsh, and the Armoric dialects of Brittany or ILydaw.

To this group also belonged old Cornish, which has been extinct as a spoken language for somewhat over a century.

Wales Brycheiniog
This small kingdom was founded as an offshoot of the Irish Déisi kingdom of Dyfed.

It was centred on Garth Madryn in the modern Brecon Beacons with a chief settlement at Talgarth or Talgar in the twelfth century, and it gained its name from that of its first independent king.

Its territory in south-east Wales was neighboured to the north by Powys, to the east by Gwent, to the south by Cernyw (and later Glywyssing), and to the west by Dyfed.

The modern word 'Brecon' is the English version of Brycheiniog.

As mentioned, the kingdom was named after King Brychen, which was taken from the word 'briych', meaning 'freckled'.

The '-iog' suffix is roughly equivalent to the English '-ed', so the people here were roughly (and amusingly) the 'freckled of the freckled' - in other words, Brychen's followers..

Traditionally, Brychen himself was born in Ireland, the son of a minor tribal king named Anlach, and moved with his parents to Wales. This ties in with the settling of the Irish Déisi in south-west Wales who took over command of the British territory of Demetia, although Anlach's pedigree would suggest that he was already in Wales, given that his grandfather had been the son of the leader of the Déisi exodus from Ireland.

Instead, Anlach's own 'moving to Wales' should perhaps be seen more in the context of his recent ancestors having moved there and his own grandfather having migrated further east into Garthmadrun (although see an alternative at circa 450, below). When Brychen was made king upon the death of his father, the area of Garthmadrun (or Garth Madrun, both older spellings of the modern Garth Madryn) was renamed Brycheiniog in his honour. This suggests that Anlach himself was not the territory's king. Instead he was probably a sub-king, governing Garthmadrun for the core Déisi to the west.
The kingdom's early capital was on a crannog at Llangorse, built by an Irish master builder to display the king's proud Irish heritage. Crannogs were unknown at this time outside Pictland (modern Scotland) or Ireland, and this is the only one of its kind in all of Wales. Luxury goods from around the world were imported here, and the kingdom's treasure was discovered in the waters around the crannog as recently as the 1970s. Unfortunately, the settlement was destroyed by an Anglo-Saxon raid just two decades after being built, and was abandoned (if only temporarily).
(Additional information by Edward Dawson, from A Study of Breconshire Place-Names, Richard Morgan & R F Peter Powell 1999, from Llyfr Baglan (The Book of Baglan), from Welsh Genealogies AD 300-1400, Peter Bartrum, from the BBC documentary series, The Story of Wales, first broadcast 3 October 2012, and from External Links: St Catwg's Church, and Catholic Online, and Ancient Wales Studies.

Urb mac Aed
Son of Aed Brosc, leader of the Déisi in Demetia.

Cormac mac Urb / Cornac
Son. Migrated into Garthmadrun from Dyfed with his father.
c.420
Anlach marries Marchel, whom Celtic works describe as the 'heiress of Garthmadrun'. The same works give Anlach's father as Cornac or Coronac, who is generally linked to Cormac mac Urb of the Déisi. Given the calculation that the Déisi had arrived in Dyfed around AD 300, this would give them ample time to become integrated into the regional nobility and for their leading sons to marry the offspring of the surviving Brito-Welsh nobility, hence Anlach's marriage to Marchel.
Brecon Beacons
The fluctuating fortunes of the kingdom of Brycheiniog took place in the dramatic landscape of the Brecon Beacons in south-eastern Wales
Marchel's Her status as 'heiress' would suggest that Garthmadrun is a parcel of territory that has been assigned to her from a larger territory, most likely the 'Kingdom of Mid-South Wales'.
fl c.420
Anlach mac Cormac
Son. 'King'.
c.450
Anlach has probably not been a king in his own right in Garthmadrun, but a sub-king or regional governor for the core Déisi to the west. His death means that he is succeeded by his son, Brychen, and it is now that the territory seemingly becomes an independent kingdom. Garthmadrun is renamed Brycheiniog to show that it is now firmly the land of Brychen and his followers.
Celtic works generally state that Brychen is born in Ireland and that his father brings the family to Wales.

While this seems to be more of a generalised remembrance of the Déisi exodus from Ireland six generations previously, at least one large group of Déisi had remained in Ireland.

This is the Déisi of southern Munster, and some of those Déisi who had been expelled from Tara joined their southern cousins.

It is possible that links survived between them and the Déisi who migrated to Dyfed, and that families could easily pass between both settlements. That would certainly allow Anlach's father or grandfather to return to Ireland and for Anlach, and later Brychen, to be born there and yet still be in Wales at a later date.
c.450 - c.490
Brychen Brycheiniog (St)
Son.